Anyway! Let’s get back on track. This week, I’m reviewing one of Revlon’s new mascaras from their recently launched and streamlined line.

There’s a number of pictures in this post, so let’s continue after the jump.

I have very fine, light brown lashes that are almost invisible sans makeup and mascara. They’ve got some length and a good bit of natural curl (no lash curler needed here!), but they need volume LIKE WHOA. So, I usually go for volumizing formulas.

Revlon recently revamped and relaunched their entire line of mascaras into this totally streamlined version which I am LOVING. I wish more brands did this, it makes so much more sense than having 99 different mascaras, each with a different cutesy name and different packaging/colors. 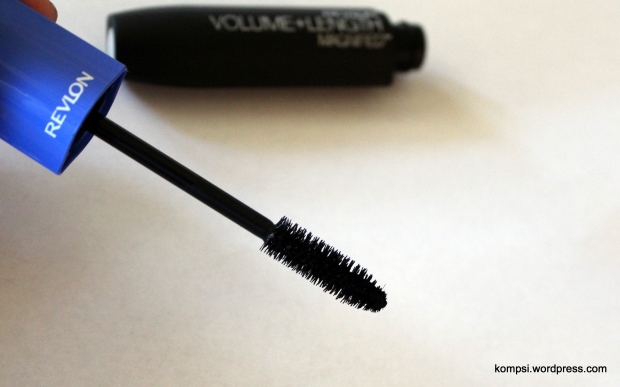 Close up of the brush.

I decided to go with the Volume + Length because while I already explained why I need volume, a little extra length doesn’t hurt either. This particular mascara, which I didn’t realize when I purchased it, is actually a fiber formula. So mixed in with the pigment are tiny little fibers that will attach to your lashes, adding not only bulk and volume, but length as well. Revlon also says that this is a “square brush designed to anchor formula to lashes for intense volume + length.” Honestly, I didn’t really notice that the brush was square shaped at all. You can kind of tell when you look at the end straight on, but I didn’t notice a difference in application. Another thing to note is that this is a dry formula, which I personally like. Wet formula mascaras tend to be messy and don’t buld as well on my fine lashes. Lastly, the brush head is a regular brush rather than a rubbery one. The rubber bristles, across just about any line high- or low-end, just don’t work for me.

Moving on! Picture above is me with no mascara on. So you can kinda see my lashes if you squint, haha. Also, this is why I always add mascara to my list of makeup can’t-live-withouts.

What a difference! So I quite liked this mascara. The fibers definitely help in giving my lashes a fuller, longer appearance. However, I wasn’t crazy about the flattened shape of the cap. when I apply mascara, I like to turn the brush in my hand to get a “fresh” side and the shape of the cap makes it a little difficult to do that one-handed. It’s a minor quip, I know, but not something I would have picked up on had I not tried it. Also, the package claims that this is a “high shine” formula (this is the shade Blackest Black, by the way). I didn’t feel like this came up as high shine to me. It sort of looks like it might be in these pictures, but in Real Life, not so much.

Here’s after two coats, fuller and more plush. For these pictures, there was quite a bit of drying time in between coats. I would suggest, and what I’ve continued to do, is to apply two coats back-to-back. So do one eye completely, then the other. I think it layers better that way and it won’t end up clumpy or weird looking.

Here’s what the whole face looks like. I’ve worn it a few times since I took these and I’ve noticed that it really looks faded by the 7-8 hour mark. If I were to go anywhere after work, I would definitely need a touch-up. It didn’t flake much, not like my former beloved Maybelline Colossal would (I swear, that was the best mascara for the longest time and I think Maybelline changed the formula because it would just flake like crazy and be all under my eyes and it didn’t used to be like that).

Anyway, I’m really interested in trying the volume only mascara in this new Revlon line to see how it compares. I do like this one, but I don’t know if I like it enough to repurchase. However, if I was in a place where I needed to buy an emergency mascara, I know that this is a reliable one that works for me. Lastly, I just want to shout-out to my lip color in the picture above! It’s one of the new shades of Nyx’s Soft Matte Lip Creams, a plummy red called Budapest. I’M IN LOVE. I’ve worn it off and on all month!